Rojer Inn, nicknamed "Halfgrip" in Thesa, because he is missing two fingers from his right hand, and formally titled, Rojer asu Jessum am’Inn am’Bridge, by the Krasians. Rojer is a POV character in The Warded Man and The Desert Spear. Rojer is extremely close to both Leesha Paper and Arlen Bales, and is crucial to the demon war in Thesa. Rojer is a trained Jongleur, and an extremely gifted musician, favouring the fiddle. He is foremost in developing the use of music to interact with magic, to confuse or otherwise affect demons.

Rojer was born in Riverbridge, where he lived in the Inn which his parents,Kally and Jessum, owned. When Rojer was three (318 AR), Geral, a messenger, and the Duke's Herald, Arrick Sweetsong, took refuge at Riverbridge, staying in his parents' Inn.

At the time, the village warder, Master Piter, had not maintained the local wards. Despite concerns raised by Jessum, Piter worked on the impressive and publically visible wards on the local bridge, in an attempt to impress Duke Rhinebeck, and potentially gain a commission.

The weakened wards meant that corelings were able enter the village, and Inn proper that night. Jessum and Geral were unable to hold off the attack. As Arrick ran for the bolthole with his belongings Kally begged him to take Rojer, shoving the child into his arms. During the fight, a flame demon bit two fingers (middle and index) from Rojer's right hand - the reason he became known as 'halfgrip'. As the flame demon took the fingers, it left Rojer with a small lock of his mother's red hair, which he later fashioned into a talisman, a tiny doll of wood topped with his mother's hair, which he wore around his neck almost consantly.

While Riverbridge burned, Arrick decided the only chance to survive would be to get to Jessum's warded messenger's circle. At the circle, Arrick found Rojer wounded. They stopped and looked around to see the demons dancing and feeding on all of the villagers. Arrick realized that Rojer's hometown was not just gone but destroyed. He sang a lullaby to put him to sleep and distract him from what was happening.

After returning to Fort Angiers, Arrick becomes like a father to Rojer, also taking him on as an apprentice. At some point between 318-325AR, Arrick is dismissed from his position as Duke's Herald for bringing Rojer to a brothel, where he is found sleeping, by the Duke.

The loss of his position worsens Arrick's gambling and drinking, or simply becomes unsustainable with the loss of financial support. Additionally, Arrick fell out of favour with the Jongleur's Guild, who control where and when their members can perform, and therefore how much they are paid.

This means Rojer lived a meager life, scraping by and taking care of Arrick and his affairs, playing various small common spaces to the public in Fort Angiers.

As a young boy, Rojer's guilt becomes apparent. He blames himself both for his parent's death, believing he made them sacrifice themselves to save him; he also blames himself for Arrick's worsening position, believing he shouldn't have let himself be found in the brothel by the Duke. This remains a consistent motivator throughout Rojer's life.

Rojer has an uncanny ability to manipulate the demons emotions and actions with his fiddle. On occasion, this ability has been used to force the demons to injure or kill themselves.

Though he has tried to teach this ability to others, it seems to be more natural talent than learned skill. His apprentice Kendall is the most adept at it, and Rojer is very proud of her and her progress.

Amanvah and Sikvah both lend their voices to Rojer and Kendall's fiddles, meaning the ability is not restricted to fiddles, and could possibly be taught on other instruments.

He is a kind of cowardly person at times, while not known for his bravery he is willing to stand in front of a demon for his friends or loved ones when the time calls for it. He generally uses humor to mask his pain and any thoughts he does not want to share. He holds oaths in high regards and believes that it measures the man who holds it. He has deep pain and hatred for himself, blaming himself for all the pain caused to those around him.

Rojer is in his childhood with his master a quiet and shy child scared of the dark and keeps to himself most of the time. He was also secretly a lonely boy, as he knew that the injury to his hand made him an outsider, he was also very responsible keeping his master from getting kick out of the room they were staying in and reminding him or waking him when they needed to go out to preform, as arrick was usually drunk or hungover.

As he grew up on the road with only himself to look after he took on many of Arrick's mannerisms and lost much of his responsibility, taking women whenever they offered themselves married or not.

Despite what Rojer's master did to him, he still loved Arrick like a father. He wished that he hated Arrick but couldn't bring himself to do it. 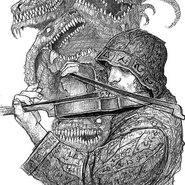 Retrieved from "https://thedemoncycle.fandom.com/wiki/Rojer_Inn?oldid=7622"
Community content is available under CC-BY-SA unless otherwise noted.