Renna Tanner, youngest daughter of Harl Tanner of Tibbet's Brook, born 309 AR, is one of the POV characters in The Desert Spear.

As Arlen and Jeph Bales are travelling, trying to get Silvy to get cured from a coreling attack, they take succour at Harl Tanner's farm where Renna gets to know Arlen more. While there, they overhear Jeph and Harl promising Arlen and herself, but Arlen ran before that could officially happen.

Many years later, with Ilain gone and Beni marrying Lucik , Harl turned all of his attention to Renna and made life a living hell. Her only hope was to marry herself to Cobie Fisher , but her plans were ruined when Harl found out and both respective parents wanted them to stay away from each other. One day Renna had enough and ran from home, trying to get to a safe place before nightfall. She went to see Cobie but he turned her away. Later, feeling bad, Cobie went to see her in private and Harl showed up and killed Cobie with his knife and just as he sheathed it Renna pulled it out and stabbed Harl continuously. Soon after the bodies were found the whole of Tibbet's Brook blamed the now traumatised Renna and by the old law, she had to be left out to be dealt with by the corelings. Before that could happen she was saved by the Warded Man. It did not take her long to figure out the the Warded Man was Arlen , and asked if she could travel with him. As they set out he taught her many things about hunting demons and wards, she was an incredibly fast learner and did not take long to get the idea to ward her flesh as well, although her warding is made with Blackstem and is temporary. At the end of The Desert Spear, Arlen promises himself to her.

Renna becomes more and more consumed with the idea of being as strong as Arlen. She learns from him the source of his powers, having eaten demon meat while he was left for dead in the Krasian desert. She secretly begins to hunt and eat demons herself, often lamenting that her powers are still vastly inferior to Arlens.

On their travels, they meet a horse farmer, whom Arlen saved when he was a Messenger. Renna receives a strong-willed horse from him and names it Promise. Eventually the two reach Deliverer's Hollow, where Renna meets Leesha, whom she has always regarded as a rival. She gives Arlen an ultimatum to marry her or dissolve the promise. They are married and she begins to fight at Arlen's side, developing many of the same powers as Arlen, albeit less powerful.

Throughout the book, we see Renna wrestle with the hunger for magic, but her inability to control her feelings. She frequently gives herself to sudden outbursts of anger.

In The Core, the Alagai Ka (Demon Consort) calls Renna "The Hunter".[1] 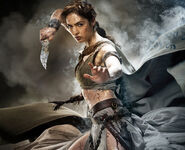 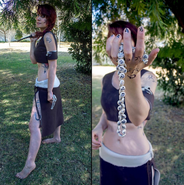 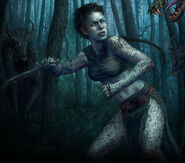 Retrieved from "https://thedemoncycle.fandom.com/wiki/Renna_Tanner?oldid=7651"
Community content is available under CC-BY-SA unless otherwise noted.