Start a Wiki
This article is a stub. You can help the Demon Cycle Wiki by expanding it.

Leesha Paper, daughter of Elona and Ernal Paper of Cutter's Hollow. Born 306 AR, she is one of the series main POV characters.

Leesha Paper, a shy girl in her youth, was popular and kind with great intelligence, but groomed by her mother to be simply a house wife. Elona promised her to Gared Cutter (Steave Cutter's son), some time during her early childhood. Leesha did not mind this due to Gared's good looks and his kind treatment of her. Due to the cold manner her mother treated her she looked upon Gared as her salvation and escape from her mother. During her youth she became friends with the other young women of Cutter's Hollow. Despite her intelligence, her mother had kept her in the dark about many things, specifically sexual protection and her own past as well as anything that would encourage her to leave or do anything besides become a house wife.

In 319 AR during a demon attack the Cutter family, as well as several others, were left homeless. While Leesha was helping restore the town she was asked by Bruna, known commonly as "The Old Hag Bruna", to assist her in treatment of the injured townspeople. During the last treatment she gave, and were left alone, Bruna suffered from a spasm which Leesha saved her from by massaging her arm so she could have enough control to give her a medicine which Leesha made her drink to cure her.

During the Night of celebration in the town hall many of Leesha's friends spoke to her cruelly about Bruna (most of which were only rumours). Later that Night Elona volunteered to take Gared and Steave into their home which both worried and gladdened her. Bruna herself later came to ask for Leesha's help and took Gared with her as well due to the fact that he ran tender Jona off for trying to speak to her.

Leesha Papers is a gifted Herb Gatherer, and later on in the books become proficient in many arts. Such as warding, her talents rivalling those of many great warders, though not studying the art form for very long. But her real talent shines in her medical expertise and demonology. She picks up things very quickly, like learning the Krasian tongue in very little time. She studied demon carcases, learning their anatomy. Using it to exploit them, and once she realized the bones themselves held great power and magic she began warding those. Making extremely dangerous weapons. Bruna, the herb-gatherer that taught her everything she knows about herbs and medicine, was considered one of the finest herb gatherers ever to live. Most of her demonology and warding education came from Arlen Bales either by direct teaching or observation. She has no one particular study she shines in, for she in proficient in most, making her extremely smart, and not to be trifled with.

She is usually a kind and very responsible person. While she cares for others greatly and is often motherly. She expects to be followed as the village Herb Gatherer, although she feels it's her responsibility to take care of everyone. Because of this she feels lonely in terms of love and deeply wants children. She is close to her father, but not her mother due to her mother's selfish ways. While she is seen by many to be perfect, she does have flaws; Due to the fact she was always wanted, she does not know how to deal with someone she does not have feelings for and the pain of loving someone who does not love her back and her actions in letting then down often come off as cruel.

In her youth, she was a kind and pure girl with a naive view of the world and the village. She loved Gared Cutter, but he betrayed her and forever drove a wedge between them.

As a woman she remained kind but firm, she did however feel great loneliness as she gathered herbs and longed for children.

? This article or section includes speculation, observations, or opinions possibly supported by lore or the author.

Leesha is an variation of Licia and means "From Lycia". It is a possibility that Peter V. Brett have thought of Saint Lucia that according to the legend had stayed up all night praying for her mother to get well before she fell asleep, exhausted. The next morning her mother was healthy again.

Photos for cover of The Core 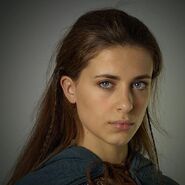 Retrieved from "https://thedemoncycle.fandom.com/wiki/Leesha_Paper?oldid=7631"
Community content is available under CC-BY-SA unless otherwise noted.