Ahmann Jardir, son of Kajivah and Hoshkamin of Krasia, born 296 AR, is one of the POV characters in The Desert Spear.

While he was Sharum Ka, Arlen Bales arrived in fort Krasia for the first time to deliver letters and became the first Greenlander, or Chin, to fight in the maze. Several years after, Jardir and Arlen had become great friends and when Arlen arrived in Krasia with a strange spear in tow, Jardir seizes the chance. When Jardir recognizes the Spear of Kaji, he ambushes his former friend and steals the spear and leaves Arlen in the desert to die. The next morning, Jardir announces that he is Shar'dama Ka, all the while trying to convince himself that he genuinely is the Deliverer and not a pretender like he believes Arlen to be.

Five years after, Jardir has given out the fighting wards to his warriors and prepares to march to the Greenlands and conquer like Kaji did, never even speculating that Arlen had survived and would gather armies to oppose him.

The brother of Imisandre, Hoshvah and Hanya. Ahmann always dreamed of becoming a part of the Warrior class and gaining glory. His family was very poor and even more so after his father was killed in a well raid.

Jardir was taken to the Kaji'sharaj at the age of nine by Drillmaster Qeran and Kaval. He would also meet Abban and the two would make a pact saying "We'll help each other through Hannu Pash. If you stumble, I will catch you, and if I fall, you, will cushion it."

Jardir and Abban was beaten by Hasik and his friends his first night in the Kaji Sharaj. Hasik would later break Jardir's arm and send him to the Dama'Ting pavilion to be healed. While there he meets a nie' dama'ting who later would be revealed as Inevera. While Jardir's Arm was broken he trained hard to make up for his injury and when his cast was removed he defeated Shanjat to prove his injury had not weakened him.

When Hasik begin training for the maze Jardir would begin to excel at Hannu Pash being the number one boy in the gruel line even though he was younger than most, being named Nie Ka at the age of 12 and being the first boy in 300 years to net a demon at his age.

After Jardir fought the demons with Hasik, Hasik convinced Jardir that he can teach Jardir how to please a woman. Hasik dragged Jardir to an isolated place and raped him. This is where he was found by Inevera. She decided Jardir's fate with her dice.

As known to the Demon Consort Edit

Edit to right of the section title.
In The Core, the Alagai Ka calls Ahmann Jardir "The Heir".[1]

Jardir believes himself to be an honorable man. However, he will commit dishonorable deeds, if he believes it serves a greater purpose. As a child, he wished to restore honor to his family line by becoming a great warrior. He has little respect for men who do not fight against the demons. This is shown when Abban pleads for Jardir to save him from falling to his death. After Jardir saves him, Jardir is disgusted by Abban's presence. He shows respect to Arlen and could not kill Arlen after stealing The Spear of Kaji. However, he did steal the spear and shows prejudice to Arlen, because he is not Krasian.

He loves Inevera and listens to her advice often. Although, he does enjoy having sex with his other wives. Jardir became fascinated with Leesha Paper. Thus, Jardir and Leesha engaged in a sexual relationship. When Inevera and Leesha demanded Jardir to choose one or the other, Jardir could not manage to choose one woman over the other. 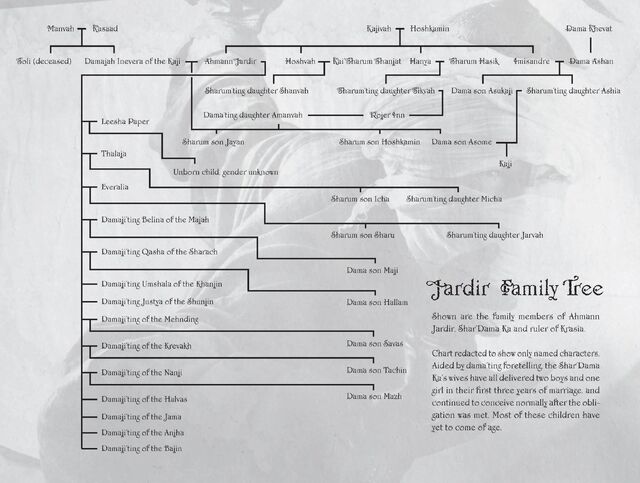 Retrieved from "https://thedemoncycle.fandom.com/wiki/Ahmann_Jardir?oldid=7683"
Community content is available under CC-BY-SA unless otherwise noted.